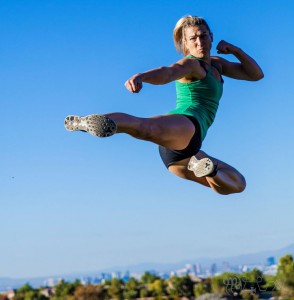 Her name is Jesse Graff and she recently became the first woman to qualify for city finals on American Ninja Warrior Season 8. How did she do it you ask? After flying through the floating steps with ease she crushed the swing bar and walked right through the escalators without any hesitation. She continued straight through to the rings, directly to the I-beam and up the 14 1/2 foot warped wall like a BOSS! All while wearing a Wonder Woman inspired 2-piece and a smile. Gotta lover her I tell you!

For those of you that don’t know much about this Cute Tomboy, Jesse was born in New York City in 1984 and as soon as she was able to speak, the first word that came out of her mouth was … wait for it … edge! That really does explain a lot about this talented young woman.

At the age of now, 32, Jesse has a very extensive background in competitive sports, martial arts, theatre and performer/stuntwoman.

At the age of 5, Jesse as I had mentioned in a previous Identifying with Cute Tomboy post, had already “identified with her physical coordination” and remembers saying to her mother that she wanted to run away to the Circus. Her mother opted for gymnastics instead and signed her up.

At the age of 9 she and her single mother moved to the woods of Pennsylvania. This was rough on Jesse because there was really nothing for her to do unless she were to travel an hour outside her residence to get there. Needles to say, her mother did just that.

They found a gymnastics gym outside of town and her mother would take Jesse four days a week while working three jobs! Goes without saying, Jesse received her hardwork and dedication from her mama.

Because of her mothers love and support, Jesse graduated as Track Team Leader and honor roll student in high school and from there, went on to receive a NCAA track and field scholarship from the University of Nebraska graduating with a degree in theater. Did I mention she also holds the pole-vault record at both Georgia Tech and University of Nebraska? I mean, wha!? I don’t know about you but that blows my mind!

The same day Jesse completed her last final at Nebraska she headed to LA to pursue her dreams and didn’t look back. Her dreams to become a REAL LIFE SUPERHERO (I’m not joking) were in eyes view and she has not failed to impress. 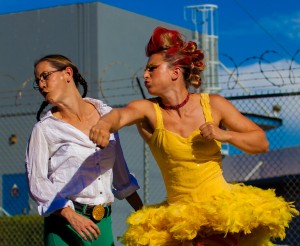 She now lives in Los Angeles and works as a professional stuntwoman having worked on many projects from the likes of  X-Men, Transformers and Iron Man 2. Her filmography is very impressive.

Being feminine shouldn’t mean you can’t be athletic, strong and confident. Healthy is attractive! – Jesse Graff